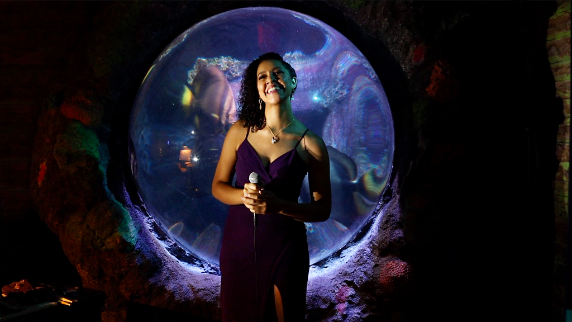 MTH Theater partners with SEA LIFE Kansas City for virtual ON THE OCEAN, BEYOND THE SEA

MTH Theater at Crown Center has announced a unique collaboration with SEA LIFE aquarium to bring its next virtual presentation to fruition.

On The Ocean, Beyond The Sea is an original video presentation celebrating tunes from maritime musicals and songs from the sea. The rich history of musical theater told on the water will be on display featuring songs from Titanic, Anything Goes, Dames at Sea, Spongebob the musical, and more! This video presentation is especially dynamic as the entire production was filmed on-site at SEA LIFE Aquarium!

Joining Edwards in the band is Tod Barnard on percussion, Cindy Egger on guitar, and Joey Panella on bass.

“In this era of virtual presentations, we wanted to provide something seemingly impossible. We’d never seen or heard of a presentation of ocean and seaside tunes produced inside an aquarium and so we thought, why not? Sea Life was an incredible collaborator and we’re excited to showcase the beauty of the music as well as this stunning Kansas City landmark,” said Scott.

On The Ocean, Beyond The Sea is presented virtually October 15 – November 1. Tickets are available by visiting www.mthkc.com.

Sea Life Aquarium is also offering $5 off Admission to SEA LIFE Kansas City, valid until November 14, by using promo code MTH20. You must present ticket from On The Ocean, Beyond The Sea at walk-up to receive discount. Limit of 6 discounts per show ticket